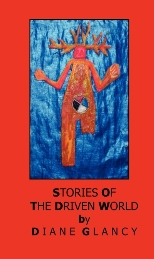 ethnologists’ use of Native soft and hard cultures. 2010. 108 pp. 978-0-9800102-9-9 perfect-bound, paper $14.00. 978-0-9800102-8-2 laminate case, hardback $24 In The Driven World, Diane Glancy creates an original vision of North America, pieced from real and invented historic documents, museum artifacts, and field notes. Language is the transformative tool as at the author imagines herself in the position of both explorers and explored peoples. Glancy uses varieties of language—petroglyphs, Morse code, Cherokee, Inuit, and 19th century English—to describe simultaneously the New World of European Americans and the homeland of Indigenous Americans.

book of verse experiments with biography as lyric. She shares the compelling story of her Cherokee father’s work in a meatpacking plant. She selects memories and images that dramatize his story, one that speaks to me because my Native grandfather also worked in the same meatpacking plant in Kansas City. This is poor people’s work, dangerous and physically difficult. This is the backdrop for Glancy’s book-length meditation on children’s resilience, families, loss, survival, and faith. This is one of Glancy’s most emotional and effective compositions.”

“Diane Glancy has established herself as one of the country’s most versatile and prolific writers. Distinguished by her laconic honesty, she presents Native American life—especially the ways it intersects with non-native culture—in all its complexity and nuance.” Jessica Bennett, Univ. of North Dakota

DIANE GLANCY is visiting professor at Azusa College. An award-winning author and filmmaker, she writes from the viewpoint of a feminist, postcolonial Indigenous

American, literary-nationalist, and mainstream Christian. She is professor emeritus at Macalester College in St. Paul, Minnesota, where she taught Native American Literature and Creative Writing. She was the 2008-09 Visiting Richard Thomas Professor of Creative Writing at Kenyon College in Gambier, Ohio. Her awards include a 2009 Expressive Arts Grant from the National Museum of the American Indian, the 2008 William Rockhill Nelson Poetry Award from The Writer’s Place and the Kansas City Star, two National Endowment for the Arts Fellowships, the 2003 Juniper Prize from the University of Massachusetts Press, a Minnesota Book Award, an Oklahoma Book Award, and an American Book Award from The Before Columbus Foundation. Glancy is of Cherokee and German / English heritage. She lives in Shawnee Mission, Kansas. Her website is www.dianeglancy.com .